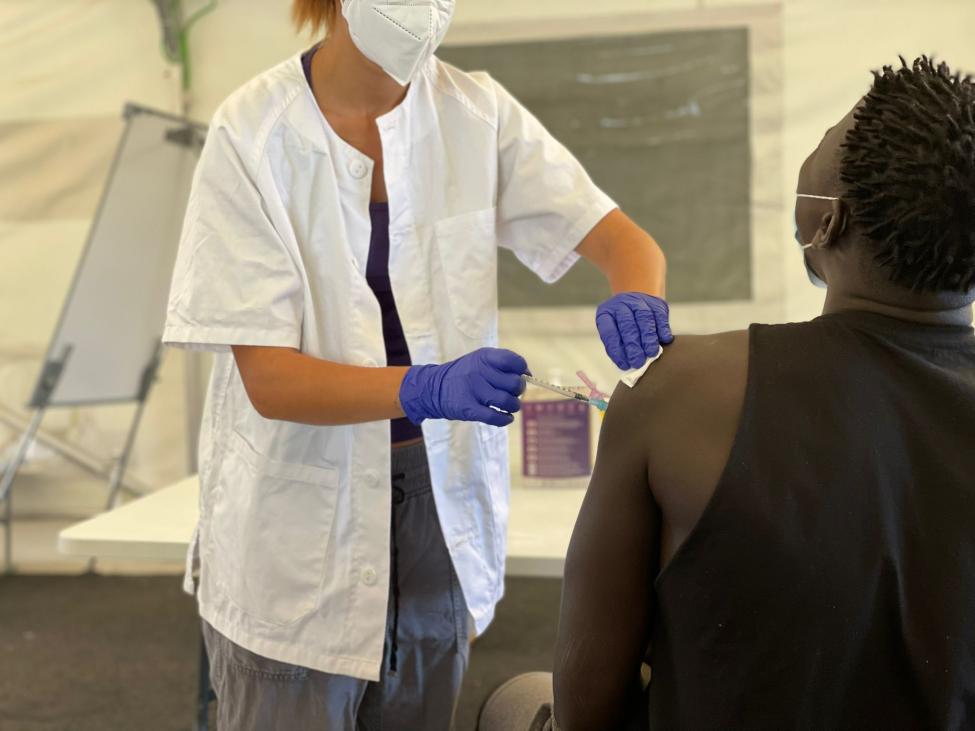 Berlin – Governments could close COVID-19 vaccination gaps by breaking down language barriers and giving migrants easier access to information, according to a study published today (11/02) by the International Organization for Migration and the University of Potsdam.

Studies from several countries in the US and Europe, including Germany, suggest that vaccination rates are lower among migrant communities compared to the general population. Gaps may vary by country and group but a recent study by the Robert Koch Institute in Germany revealed that the vaccination rate among migrants is 8 per cent lower compared to the native-born population. The study argues that such vaccination gaps may be linked to language barriers, socioeconomic status, and misinformation among migrant communities.

IOM’s Global Migration Data Analysis Centre (GMDAC) and the University of Potsdam tested the effect of language and trust barriers in Germany via a social media campaign in their study, “Promoting COVID-19 vaccination uptake among migrant communities on social media – Evidence from Germany’’.

“More evidence on the interlinkage between migration and health is urgently needed,” said GMDAC Director Frank Laczko. “Many countries around the world have large migrant populations, yet many of them do not consider the needs of migrants sufficiently in their vaccination programmes.”

“Social media is where misinformation spreads and it is important that official public health messages are visible online and reach out to communities that are generally not exposed to mainstream media, print or TV campaigns,” said Esther Haarmann, GMDAC Digital Communications Officer and co-author of the study.

Local authorities often lack the resources to make translations available. The results highlight how many migrants are left behind by not translating outreach materials. Social media advertisements in the language of origin of migrants dramatically increased the interest in COVID-19 vaccine appointments, especially for newly arrived migrants (by 133 per cent for Arabic speakers, 76 per cent for Russian speakers and 15 per cent for Turkish speakers).

Extrapolating the translation effect to all government outreach targeting migrants could have the potential to increase vaccination rates among migrants by 14 percentage points on average. This improvement would likely close vaccination gaps between migrant groups and the general population in Germany – and in other countries.

Results also revealed that ad content showing an official government representative was more effective in increasing interest in COVID-19 vaccine appointments than other messengers such as religious leaders, families or doctors, especially among recent immigrant groups in Germany (Arabic speakers in this study).

“The results highlight the potential of local government authorities to reach migrants – a population often believed to have higher levels of mistrust in institutions,” says Jasper Tjaden, Professor at the University of Potsdam, and lead author of the study.

Dr. Nicolai Savaskan, the director of the health department in the district of Berlin-Neukölln, said local health departments benefit from evidence-based guidance on how best to reach diverse communities.

“In-person outreach is the gold standard, but we cannot reach everyone this way,” Dr. Savaskan said. “New evidence shows that online campaigns can fill the gap and are increasingly an important instrument in official health communication.”

While the study focused on Germany, the methodology is scalable to other countries to improve outreach and support equitable access to health services, including for refugees, asylum seekers, migrants in irregular situations, and hard-to-reach populations.

Alarming Loss of Life on Way to Canaries Worsens in 2021