Making Migration Data Accessible for All 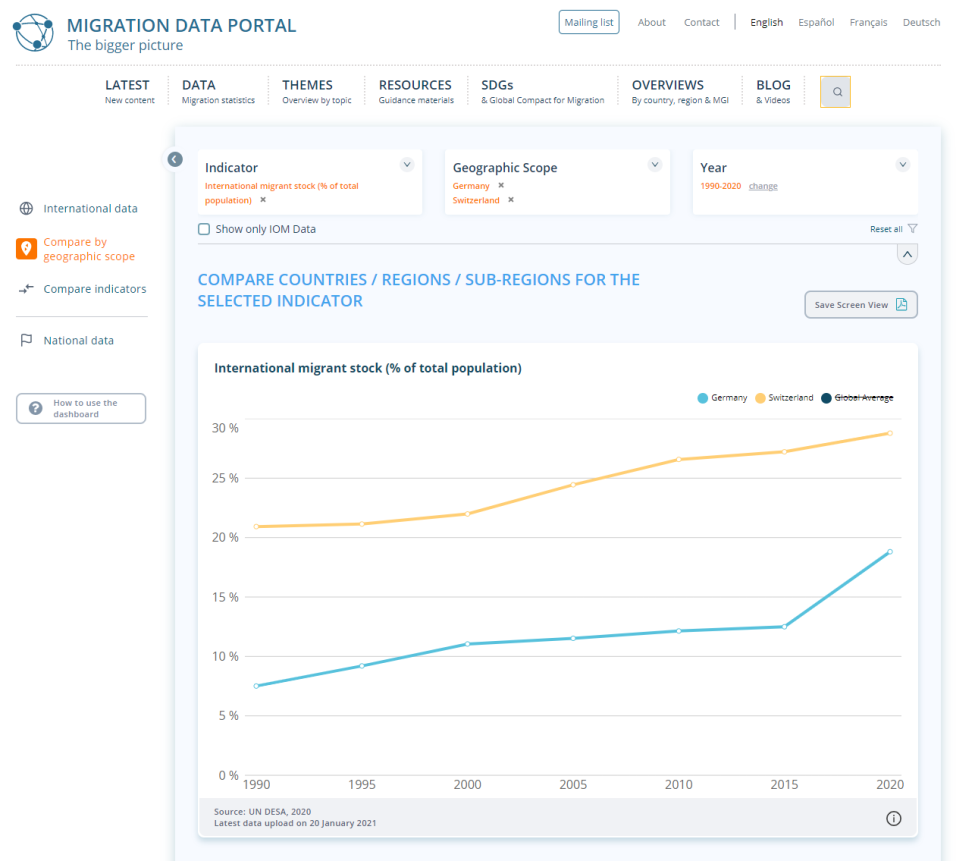 Berlin - Timely and comprehensive migration statistics are essential for developing policies that benefit migrants, as well as their communities of origin and destination. Today (15/06), the Global Migration Data Portal is unveiling its new dashboard featuring a series of tools to help policymakers, national statistics officers, journalists, and the general public gain access to the latest data on migration.

Launched in December 2017, the Portal promotes collaboration between IOM and other agencies to provide reliable and accessible data, as well as analysis on migrant statistics. The Portal is managed by the Global Migration Data Analysis Centre (GMDAC) in Berlin.

“We’re excited to launch these new features, which were developed based on the feedback received by its users, people from around the world looking for reliable and timely migration data,” said Frank Laczko, IOM GMDAC Director.

“For over three years, the Portal has gathered relevant data on migration in one place and now it will be easier for its users to access it.”

Since its inception, the Portal has collected feedback from users to optimize its features. As part of the upgrades, the Portal’s iconic world map is being expanded with a new dashboard with three interactive sections that will help users analyze and visualize data more easily.

One of the new sections allows users to visualize and compare international migration data from different countries, regions and sub-regions. Another section enables users to compare different indicators ranging from migration stocks to remittances, and from children on the move to victims of trafficking. For example, users can quickly see that, according to UN DESA, an estimated 2.5 million and 15.8 million migrants were resident in Switzerland and Germany respectively as of mid-year 2020, but the share of migrants in the total population was higher in Switzerland than in Germany.

In addition, the new national data pilot section aims to bring together national data from different sources visualized in one place. This pilot features national migration data from government sources in Switzerland, South Africa, New Zealand and Germany as well as WorldPop estimates on subnational migration between countries, a pilot project funded by Switzerland. The Portal team aims to expand the pilot national data section to include other countries from different regions over the coming years.

“We are proud to have contributed to an innovative piece of work that combines traditional with new data sources to arrive at a better understanding of migration patterns between countries of the global south,” said Nina Hälg from the Peace and Human Rights Division at the Government of Switzerland’s Ministry of Foreign Affairs.

“We therefore support IOM in its efforts to provide a one-stop access to reliable data on migration,” she added.

With an average of more than 175,000 page views per month in the past year and more than 2.3 million page views since May 2020, the Portal aims to facilitate unhindered access to authoritative, up-to-date migration data and analysis to increase evidence-based migration governance and public debate.

The Portal is supported financially by IOM Member States, including the Government of Germany represented by the Federal Office for Migration and Refugees (BAMF), the Government of Switzerland, as well as unearmarked funding granted to IOM and internally allocated through the Migration Allocation Resource Committee (MIRAC).